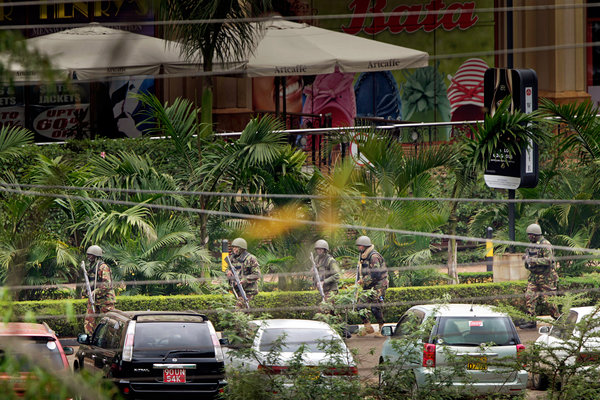 Tragedy struck Nairobi, Kenya yesterday as 59 were left dead and as many as 175 have been wounded, the victims including children and the wife of a diplomat working for the US Agency for International Development. According to reports, multiple barrages of gun-fire erupted Sunday morning from inside, the upscale mall where hostages were being held by militants. Radicals first attacked on Saturday and remained inside throughout the night. It’s believed that 10-15 hostages are STILL being held inside where armed Islamic extremists have been taking over. These extremists are said to be linked to the Al Qaeda.

Huffington Post reports: “Somalia’s al-qaida-linked rebel group, Al-Shabab claimed responsibility for the attack in which they used grenades and assault rifles and specifically targeted non-muslims. The rebels said the attack was retribution for Kenyan forces’ 2011 push into Somalia and threatened more attacks.”

Former Kenyan Prime Minister, Raila Odinga told reporters at the mall that officials can not yet determine the exact amount of hostages still inside. He says, “There are quite a number of people still being held hostage on the third floor and the basement area where the terrorists are still in charge.”