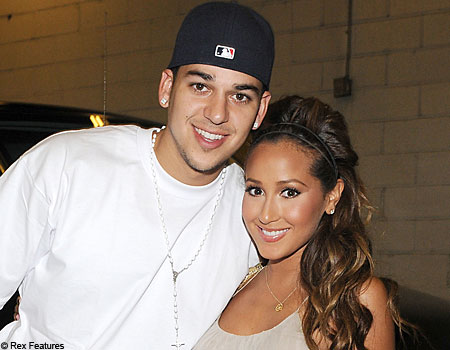 Is there a relationship curse out on the Kardashian clan? Hmm, maybe so, because according to the new Life and Style, Robert Kardashian and Cheetah Girl’s own, Adrienne Bailon have split up, officially. Rob, 22, and girlfriend Adrienne, 25, split because “it just got too hard,” says the insider. “They are just so young. She is very career-oriented, and he’s still in school.” Luckily for this couple, it wasn’t a bitter breakup. “They are still friends, but it’s definitely over.”

The insider also reveals that Rob’s sister, Kourtney Kardashian has ended her relationship with Scott Disick. “Kourtney and Scott have been having problems for a while, and Kourtney finally got tired of Scott’s fidelity issues,” the insider reveals. “He was openly flirting with other women — and probably more. He was also partying harder and harder. Kourtney called off the engagement, and they split a few months ago.”

And as Life & Style already reported, there is no hope for Khloe, 24, and her ex-boyfriend, the Minnesota Timberwolves’ Rashad McCants, 24. “Rashad is still trying to use Khloe for publicity!” the insider says. “He flew himself to Las Vegas last weekend and tried to crash a party that Khloe was hosting, but Khloe thinks he’s a loser.”

DAMN, DAMN, AND DAMN! DID LIL’ KIM “THROW A HEX ON THE WHOLE FAMILY, DRESSED IN ALL BLACK..” LMAO OK THIS AIN’T RAP TIME..BUT DAMN, POOR GIRLS..AND BOYS…AND POOR ADRIENNE AND ROB, BECAUSE NOT ONLY ARE THEY BROKEN UP BUT SHE HAS A STAMP ON HER ASS OF HIS NAME AND HE HAS HER NAMED ON HIS CHEST…TSK TSK TSK…CAN WE SAY IT ALL TOGETHER NOW? “WE SAW THIS ONE COMING!”….WISH THEM ALL THE BEST….KIM K AND REGGIE BETTER WATCH THIER BACKS!